«A panoramic view of Venice requiring very careful research carried out during its preparation and an extremely precise and ‘analytical’ rendering of detail, which in no way detracts from the overall balance». An exceptional artistic talent is evident in the work of Guido Albanello, who accepted to undertake this project conceived and promoted by the Vicentine publisher Gilberto Padovan.
Many other similar views of the city exist, including those by the artists Breydenbach, Ippolito Caffi, Giovanni Pividor and Marco Moro. This fascinating work offers an extremely precise, suggestive representation of the city of Venice, visually embracing its entire layout as seen from the south, and instilling in the observer a sense of awe and fascination.

We may also reflect on the difficulties which the artists who accepted the challenge of such an enterprise had to overcome in past centuries and which still remain today; the fundamental obstacle lies in the fact that the monumental city of Venice was built entirely at sea level, and therefore offers a totally flat horizontal profile, making it rather difficult to faithfully represent in a perspective view the dense layout of buildings in this ancient city. In this work it is moreover interesting to note the subtle blending of the elements of air and water on the horizon. 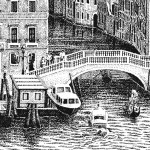 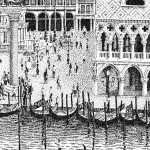 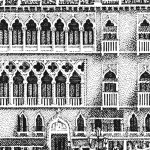 The work certainly exceeds the scope of those produced in past centuries; it presents an unusual procedure whereby the limits of traditional drawings and paintings can be overcome, allowing the urban profile to be presented in a panoramic 360-degree view extending across seven large sheets measuring 1.6 m in length.

Essential characteristics of this very high-quality artwork also include the artist’s dedication to the project, its precision and unique features and its authenticity.
It took six years to reproduce in ink every small detail of the buildings, structures and elements depicted in the drawings. The work is moreover the tangible result of a desire to create a large, highly-detailed panoramic view of Venice surpassing all others in terms of its dimensions.
This new, original representation even generates the impression that one is actually present in the city itself. It is possible that the observer will feel entirely captivated in this vast, natural and yet artificial urban setting, also reminiscent of geometrical figures or which one may imagine as a kind of alchemical symbol of an incomparable and eternal phoenix.

Scroll the image below